17 Jan 7 Reasons Why I Wanna Be Crazy

Posted at 12:26h in Uncategorized by admin 0 Comments

Who says you’re crazy? Be thankful!

Yes! Be thankful to them because I have discovered that crazy people are those who take risks in life in order to succeed. Those who are out of their heads are the ones usually charge their mistakes and failures to experience. The term “out of the box” is very common in brainstorming (or mindstroming) sessions. Thinking out of the box is something like making a way in the desert, going out of limitations, breaking rules and regulations, out of the norms, out of the tradition. That’s crazy!

Sometimes, we need to be out of our thinking hats to appreciate what we have in life. Let me stress my points.

1. They laugh at their mistakes.
Do you know somebody like this? They are patient with themselves. They know that along the way, they will fail, slip on the floor, scratch heads, hit below zero and more. So, instead of taking it seriously and playing the blame game, they just laugh. Just like a 3-year old kid who dumped himself with dirt. It’s so much fun!

2. They chase after the wind.
Fearless. Their life goals might be impossible to happen, as chasing after the wind, but through persistence, they get what they want. The things in life might take them too long, too painful and too exhausting and yet they are still kicking. Think like a young bird that is just learning how to fly. 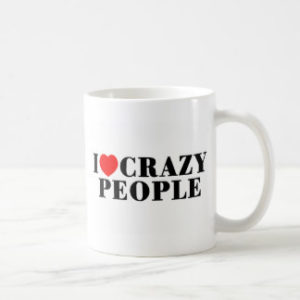 4. They dare to learn many things.
Only satisfied and complacent people are good with little knowledge. Those who are out of their minds unlocks their knowledge storage, cleans it a little bit to prepare a space for new things. Just like a sponge, it constantly releases and absorbs liquids.

5. They don’t settle for less.
Crazy people have big dreams! Yes, so huge that it might take them too long to accomplish it. Small dreams are achieved fast, in a year or so. Big dreams will sweat us a lot. Why dream for a small house for your family if you can dream a mansion where there are so many rooms that you can accommodate the homeless?

6. They don’t stay at one place.
On a rocking chair, you feel the thrill but you stay where you are. Ferdinand Magellan, the Portuguese explorer in 1520’s, was too crazy to think the world is round. His country rejected his idea but Spain believed in him. He sailed, proved the world is round and found the Philippines.

7. They don’t think of themselves.
The last crazy attitude is giving. The scripture says, it’s better to give than to receive. True enough? They are too crazy to feed others, share what they know, help those in need, just to see them happy. They give value to others. They may not see the results in few minutes nor hours. The truth is, they have invested a lasting impact to the life of those they helped.

Imagine the world is filled with serious people. Fun is banned. Lips are sealed. Everybody does the same thing everyday because nobody wants any changes. Who’s going to live?

Too serious?! Fly to Mars!
Crazy people, live on earth!